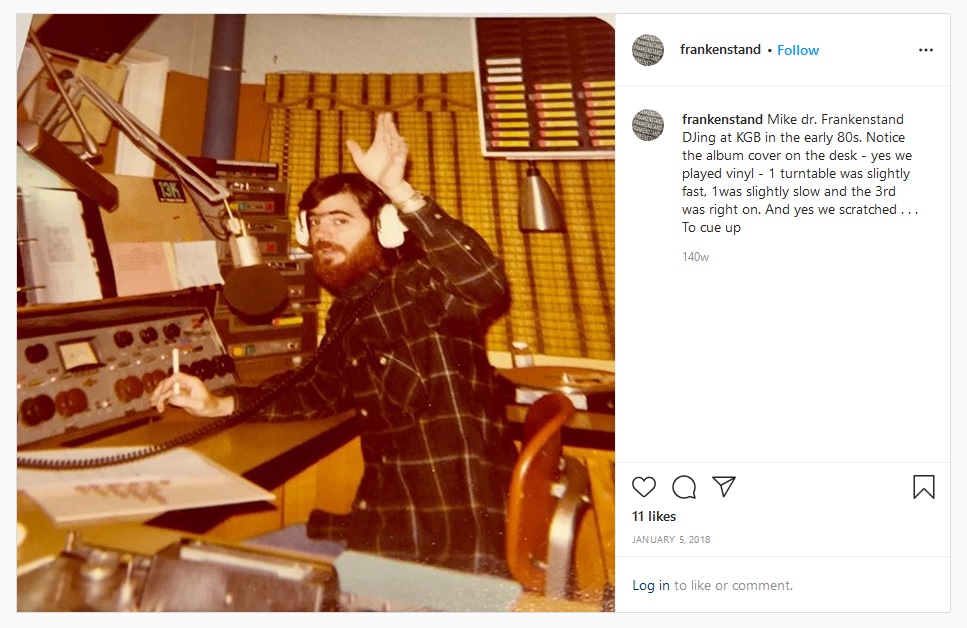 Without them, speakers wouldn’t have a leg to stand on.

Speaker stands are an important but often an overlooked part of any DJ’s equipment quiver. Let’s face it stands are kind of odd looking, three legged sticks…some DJs even cover then up with “DJ Skirts”. Darrell Schoenig disagrees and thinks tri-pod stands are beautiful. A pioneer in the speaker stand industry, he was the original founder and owner of Ultimate Support Systems (USS) speaker stands. In the mid-70s Schoenig owned a Hang Glider company in Golden Colorado. By 1976, he had sold that company and moved to Hawaii where he joined two musicians, a brother and sister, to form a Christian music group called “Sweet Melody.” The band needed speaker stands and while searching for some Schoenig was dismayed” by what was available: “I went back to the hang glider shop and fashioned a pair four legged stands out of scrap hang glider aluminum tubing” (four legs held speakers up rotisserie style). As other musicians saw them, Schoenig began getting requests to make stands for them (and) began production in his parent’s garage in 1977. A USS stand brochure describes the four legged stands: “…telescoping tubing and sophisticated folding technology, spring-loaded buttons, ball-lock pins and slide-in mounting brackets.”

Schoenig describs his first attempt to engineer his stands; “It was “seat-of-the-pants…we would load custom-made plywood boxes with sand bags to test stability…I remember testing our first (aluminum) tri-pod to failure (by) loading it with a large gas cylinder. A leg finally folded at 1100 pounds; we felt pretty good about our margin of safety since it was rated for a maximum of 100 pounds…aluminum tubing was chosen because of its high strength-to-weight ratio.”

In the 80s, USS was inundated with copies of their products. Schoenig laments safety became an issue with these copies “because of their disastrous use of inferior plastic parts. Most were made with low grade commodity resins and often regrind material…they looked and functioned like our stands, but it wasn’t long before dealers and customers alike were coming back to us…(our) commitment to quality, along with outstanding customer service, allowed the company to survive for nearly 35 years.”

During Schoenig’s reign at USS, he also designed a powered speaker stand using a pneumatic tri-pod with a pump built into one of the legs, similar to a bicycle pump. It was abandoned because of the amount of physical effort it took to lift speakers. Another idea, a mono-column stand that would achieve stability via a powered gyroscope, never made it to the drawing board but Schoenig says “it was fun envisioning it”. He adds that for a couple of years USS produced a “rather bizarre looking stand for a company that made globe-like round speakers called “Around Sound” but production stopped when the company went out of business. It’s probably safe to say that Schoenig’s tri-pod speaker stand design set the standard for the music industry as well.

Fast forward to 2001, and the birth of (my baby) the “powered speaker stand”. I was DJing at an outside Wedding in La Jolla, California. when I started to lift my 46 pound Mackie speaker onto my stand and with my shoulder under the speaker, one foot on the stand’s leg brace, one hand on the sliding tube and the other on the locking knob I lifted the speaker. I stopped and said to myself there had to be an easier way to do this. A light bulb went off in my head – install a gas springs in the stand like the ones used in the automobile industry for car hoods and pickup camper shell windows. I had once worked at an auto parts store and was familiar with gas springs (or struts, dampers, shocks) so I bought one from our local auto parts store, cut and pasted an all-thread rod and turn-buckle and invented the world’s first “Air-Powered Speaker Stand”.

Before I settled on a tri-pod I built a single pole stand (mono-column?) using a round metal disc as its base. I actually used a tractor plow disc for the base but it weighted a ton. I settled on the tri-pod design and excitedly showed my prototype off at a San Diego DJ Association meeting. Everyone was thrilled when the speaker lifted and rose up all the way up. Then one of our members, DJ Diane Desiderio, tried to pull the speaker stand down and it wouldn’t budge. After consulting with a gas springs company, I learned about the term “neutral buoyancy” – the idea that gas springs, filled with Nitrogen gas, are designed to lift a weight up just as easy as it is to lower it (“EZ UP, EZ DOWN”)…thus the Neutral Buoyancy description.

Interestingly, my path crossed with Schonig’s former company. Convinced that I had a good idea, I made a business agreement with Ultimate to purchase and OEM their unbranded TS-80 stands for my speaker stand business, “Frankenstand”. Yeah, I know it’s a silly name but at the time the word “monster” was being used at lot as in “Monster Energy Drink”, “Monster Cables”, Monster Stadium and the Television show “Monster Garage”. I thought about Monster and then Frankenstein and finally Frankenstand because the stands act like they’re alive (“It’s alive”) and more importantly because www.frankenstand.com was available. Now people call me dr. Frankenstand.

Eventually Ultimate was sold to Mike Belitz who took an interest in my stands. He contacted me a couple times and tried to buy me out. I declined his offers and decided to go on my own and I continue today as Sound Planning dba Frankenstand. Interestingly enough at the next NAMM music trade show Belitz displayed his own version of my design, basically the exact stand, even though I had a patent pending. One of his salesman told me “it wasn’t personal, it was just business!” Needless to say I was not a happy camper!

Since starting Frankenstand in 2005 I’ve continued to improve the Frankenstand and today we are up to Generation-Five! One of the new elements I’ve added is a pull ring plunger to lock the sliding tube down in the colasped position. The pull ring plunger is not a new idea. A couple of years ago at APEX music store in San Diego, I found a pair of old Peavey square tube tri-pod speaker stands. It had a pull ring plunger on it. Another light bulb went off and I decided to add it on my stands.

Today’s manufacturers have standardized their sliding tube measurement adopting the 35mm size to match the standardized 36mm hole most speaker manufacturers now use. There are still some old speakers using a 38mm hole but, today most if not all speakers use the smaller size. One problem that has come up is that some speaker holes seem tight causing the sliding tube to become stuck inside the speaker stand hole. I asked an engineer at JBL speakers for his opinion – he said he knew about this issue but assured me that JBL makes all their speaker holes 36mm to fit the 35mm tube. I’ve also noticed that some of the speakers now feature plastic ridges inside their speaker holes. My suggestion is that if you experience tight fitting speaker holes is to rub wax on it which will act as a lubricant while still maintaining a tight fit.

On a personal note I always wondered why DJs insist on black stands as opposed to silver or white stands. If you think about DJs usually perform in dark rooms and black stands could be a potential hazard for guests tripping on them but that’s what you guys and gals want and that’s what we manufacturers are making.

Bottom line, unless you use a “tower” speaker system you’re still going to need a pair of speaker stands! Like two personal body guards, your “sticks” stand at the ready to help you project your sound to your guests. We here at Frankenstand stand behind out speaker stands with a 100 percent manufacturers warranty. Onward and upward – Mike Ryan, President of Sound Planning (Frankenstand)*

Mike was a staff writer for Mobile Beat DJ Magazine under the byline “The Spin Doctor”.